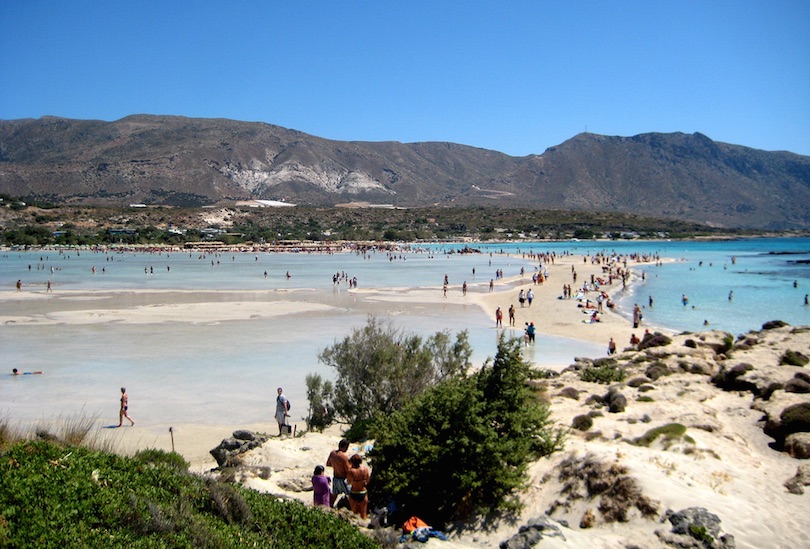 Many tourists start their trip in Heraklion, which has an international airport (five kilometers east of town), and a ferry port with service to Athens’ port, Piraeus, as well as several other Greek Islands. You can also visit Santorini on a day trip from Heraklion. Midway between Chania and Heraklion, Rethymnon’s lovely old town is made up largely of Venetian-era buildings, though there is some evidence of the year spent under Turkish rule (1669-1898) such as the towering minaret. A perfect place to day trip from the resorts of the north coast, Rethymnon has everything you need to justify leaving the beach for a day. Many historic buildings have been turned into small boutique hotels, shops, and restaurants. Wandering the shady, twisty streets and alleys in a quest to find the perfect photo followed by a long lunch on the ancient Venetian Harbour is a fine way to while away an afternoon. The mountains behind Rethymnon are home to rural villages and some excellent agritourism centers. The area makes a good base for visiting nearby attractions such as the Samaria Gorge and Mount Psiloritis.

Just a few kilometres off of the National Road, between the cities of Rethymno and Chania, is Lake Kournas, the only freshwater lake in Crete. Flanked at one end by tree-cloaked mountains, and at the other by white-sand beaches, this startlingly blue body of water is dotted with birds and ducks. Bring your cossies for a swim and snorkel, or rent a pedalo from one of the beachside vendors to explore the lake. The largest of its kind in Europe, Samariá Gorge starts from the mountain village of Omalos and carves its way through the countryside to the seaside village of Agia Roumeli. It takes about five to seven hours to complete the 16km (10mi) hike, but don’t worry, it’s downhill all the way. You’ll want to bring plenty of water and snacks, and your swimming things for cooling off in the sea when you finally reach the end.

The Arkadi Monastery was the site of one of the most tragic incidents in Crete’s history. In 1866, the Cretan residents, who were then under Turkish rule, decided to revolt. At one point during the rebellion, more than 940 Greeks, mostly women and children, took sanctuary in the monastery. The Turks lay siege to the monastery for three days and were finally able to break into its gates. At that point, the refugees decided to end their lives rather than be taken prisoner, and blew up barrels of gunpowder, which ended up killing hundreds of Turks and Cretans. The incident sparked sympathy and worldwide attention for the plight of the people of Crete. The monastery, which has been around since about the 12th century, was restored in 1870.

For most visitors coming to Crete between spring and fall, one of the top things to do is lounging on the island’s beautiful beaches. Not all beaches here are created equal. Some of Crete’s beaches are pebble, but some are among the most beautiful soft-sand beaches in the world, with crystal-clear water that glows a turquoise color under the Mediterranean sun. The most famous beaches are Elafonissi, known for its white and pink sand, and Balos, or the Balos Lagoon as it’s also frequently called. Both of these are within striking distance of Chania. And while these are must-see places, these are really just the tip of the iceberg when it comes to outstanding beaches on Crete. See additional information at https://www.chaniacar.com/.