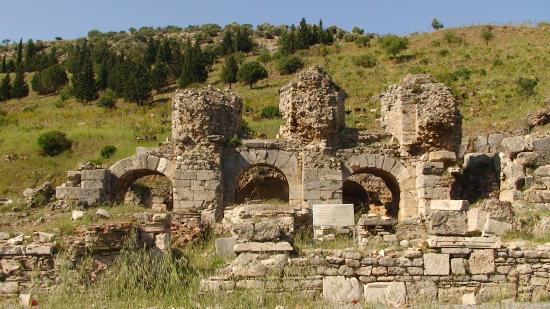 Vacation attractions in Ephesus 2023 from BestEphesusTours? See the Pollio Fountain: According to the Latin and Greek inscriptions, this building was built as a “Mausoleum” for C. Sextilius Pollio by his stepson, in the area allocated by the city administration. Thus, the person who built the Basilica and Marnas Aqueducts and dedicated them to the emperor and the city was honored on behalf of the city. There is also a small pool inside. The water of this pool comes from the wall of the Agora. On the bench in the pool was the Polyphemos sculpture group, which is exhibited today in the Ephesus Museum. Discover a lot more details on Ephesus tours from Kusadasi port.

The Meryemana is a major Christian pilgrimage site and has a curious history. Tradition holds that the Virgin Mary journeyed to Ephesus with St. John, and is said to have died here. The main building here dates from the Byzantine era (6th century), but its association with the Virgin only began in the 19th century, following the visions of the German nun, Katharina Emmerich, who gave a precise description of the situation and appearance of a house at Ephesus in which she claimed the Virgin had lived and died. In 1891, on the basis of this account, a French priest discovered the ruins of a small church, which had evidently belonged to a monastery and this is now revered as the Virgin’s house. The chapel here is tiny, and be aware that the site is often crowded with tour bus groups. A small wishing well is on-site, where it is customary to tie a piece of cloth and make a wish.

Ephesus Ancient Theatre has been known for being the biggest open-air theater of the ancient period. The capacity of this theater is 25 thousand people and it includes 65 rows. Ephesus Ancient Theatre is considered one of the most important structures worldwide in terms of art history. The theatre has not been only used for artistic activities. It has also been used as a place for gladiator fights. Even if the stage of the theatre has collapsed, the rows are still solid. The story of the theatre actually tells us about the formation of modern theatre. According to this story; various performances were held to honor Dionysus, the god of wine, during the vintage festivities. The main subject of these games was Dionysus’ life philosophy, which alternated between pleasure and pain.

After you’ve finished visiting Ephesus, head straight to this brilliant museum right in the heart of town. Some of the best finds from the ancient city and the surrounding area are on show here, including two exquisitely carved Artemis statues (one from the 1st century CE and another from the 2nd century CE) famous for their multi-breasted depiction of the goddess. Exhibits cover the entire breadth of Ephesus’ history, from the earliest history of settlement (7000 BCE) up to the Byzantine era, but the vast amount of artifacts here cover the classical era, with intricately carved statuary from the city’s Pollio Monument and Fountain of Trajan among the standout displays in the collection. Also don’t miss the highly detailed ivory frieze, depicting the Roman army, unearthed from the terraced house complex and the bronze statue of an Egyptian priest dating from the 6th century BCE, which showcases the city’s long history of trade with its regional neighbors.

Based on founder’s experiences “Best Ephesus Tours” guarantee %100 guest satisfaction on Ephesus Tours. Best Ephesus Tours aims fully satisfied guests on their Private Ephesus Tours, accordingly we prefer with working tour guides who have a national tourism ministry license but not regional. Thus, we try our guest to take benefit of their short stay in Turkey with learning about country together with famous Ephesus Ancient City also. Discover a lot more details on https://www.bestephesustours.com/.